Bring The Family Feud Game Show To Your Next Event 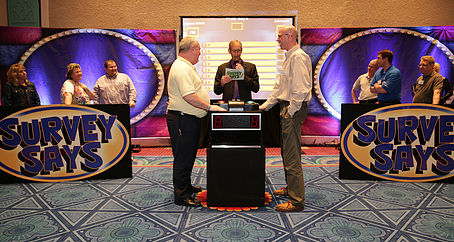 Games, especially one as popular as the Family Feud game show, can be a great way to bring people together at events. A Family Feud style interactive game lends itself to large groups because it allows the facilitator to create and rotate through groups while the others at the event are entertained by their peers.

Here are several benefits to playing interactive games with both kids and adults:

Interactive games are a simple way to get everyone in the group involved and promote team building. This is how you play our Family Feud style game – Team Feud:

A Family Feud style game can work to teach company rules, learn a curriculum or as an ice breaker so that people can get to know each other. Team Feud is a simple game that can be done at events, but instead of using regular desks and a classroom, services such as Game Shows Alive can come in with a full replica of the set of Family Feud. This will include the set backdrop and buzzers to make groups feel like they are competing on the television show.